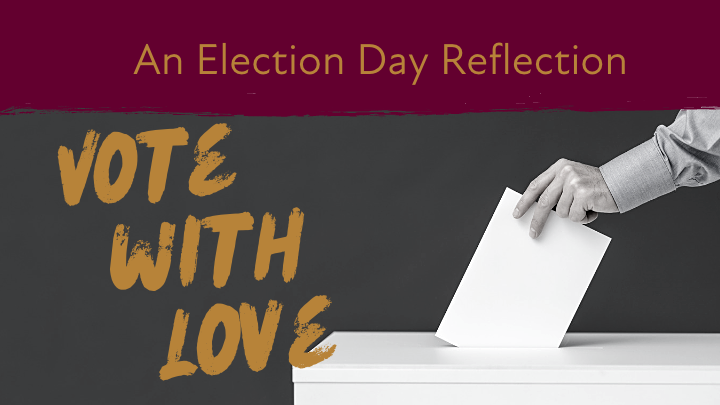 A Reflection on the Readings from the Feast of Christ the King
Jack Jezreel, the author, is the founder of JustFaith Ministries.

This week, we go to the polls to elect new leaders.  In just a couple of weeks, we will celebrate the Feast of Christ the King (a strange, even jarring combination of words).  Perhaps it’s a good time to reflect on what our faith might have to say about leaders and kings.

The first reading from the Feast of Christ the King this year is from II Samuel and includes the crescendo of Saul’s and David’s battle to govern Israel.  It is not a peaceful story.  The chapters that precede this reading are filled with violence—war, bloody raids, thievery, and murder—chapter after chapter of people getting slaughtered.  Indeed, the chapter that immediately precedes our text includes an order from David to have two young men beheaded and then their hands and feet cut off and hung up for all to see.  So, David is no Gandhi or Dalai Lama.  But probably because David’s long reign as king included a lot of prosperity for Israel, he is remembered as the chosen of God.  That’s often how history gets written.

It might be good to be reminded that this story about David becoming King follows a period in which Israel, freed from Egypt by Moses, was mandated to NEVER have a king, the mandate coming from God.  God was to be their king.  It’s likely that this conviction was birthed by the awful behavior of the Pharoah by whom they had been enslaved.  So, the formula goes like this: pharaohs and kings and political rulers generally behave badly and are often inclined to make people slaves, therefore, instead of pledging loyalty to the leadership of men (gender intentional), trust God as king.

Of course, you and I know that the idea of God as king is tricky, depending on your definition of God!  As  scripture scholars reading this are aware, these books in the Hebrew Scriptures are written well after the facts and with selective interests.   I think we would agree that the best of Scripture recognizes, when goodness and evil collide in human affairs, God’s hand in the goodness.  The worst of scripture self-interestedly wants to coronate whoever or whatever makes us wealthy, powerful and comfortable.  You might have noticed, there is a strain of Christianity like that lurking about.

The point?  David seems to have been a good ruler by the standards of the day, but he was not a role model for Jesus.  I am not persuaded that Jesus and David, both Jews, actually had much in common other than they both believed in “God,” in the same way that I’m not persuaded that St. Francis of Assisi and Pope Innocent III, both church men, had much in common.   Simply uttering God words is not a manifestation of holiness.

The Gospel text, describing an unlikely encounter between Jesus and two criminals having a conversation while nailed to a cross, is intended to reinforce the truth and meaning of Jesus: Jesus, observes one of the criminals, is innocent—a statement the Roman Empire obviously did not agree with.  Jesus, through the eyes of Roman power, was a disrupter, a problem, an agitator.  The reason, though, that this text is included in today’s reading is that it insists that God is in control, that Jesus, not Rome, is sovereign, despite the evidence.  Jesus is being publicly slaughtered, but we are given a snapshot of him consoling a criminal and asserting the fact of his kingdom that awaits.

Of course, on the feast day of Christ the King, we have to deal with the painful dissonance between Jesus, this commoner who spent his short life healing, serving the poor, preaching forgiveness and owning little, combined with the title of “King,” a word usually reserved for wealth and power.  So, how do we make some meaningful sense of this?

The important insight here is this: in spite of his death, Jesus reigns.  Let me translate: in spite of it all, in spite of what looks true in the daily news, love is king.  Love, not hate, is what raises happy children.  Love, not greed, is what makes for happy families.  Love, not guns, is what forgives and allows second chances.  Love, not exploitation, is what feeds the hungry and then changes the system so that there are no hungry.  Love is what includes, never excludes, and builds bridges of welcome and belonging.  Love is what confronts violence.  Love is what inspires simple lifestyles and care for creation.  To love well is to thrive.   Love is IT.  And when anybody or anything says something different, they are wrong.  Humans can and did destroy Jesus, but that doesn’t disprove that love is king.  We may, in fact, destroy ourselves and our planet, but that doesn’t disprove that love is king.  It just means we decided on other options.

In conclusion and as possible destinations, consider two world leaders, inarguably the two most influential religious leaders on the planet: the Dalai Lama and Pope Francis.  Not perfect men.  Don’t always get it right, in my opinion – just like you and me.  But two people who hold a lot of power together with simplicity, humility, an affection for the excluded, and a passion for the planet.  My friends, if there is to be a 22nd century, my guess is that leadership—all leadership—will have to look something like them. Love is what makes for happy children.  Mercy and justice AND love is what makes for good politicians.  I don’t see another option.  I look forward to the day when our children look back at the meanness, manipulation, and dishonesty that characterizes our politics these days and wonder what we were thinking.

So, yes, I’m all for it: even though it’s a little awkward, Christ the King.