X
Skip to content
BlogStoriesThe Road to Selma and Montgomery 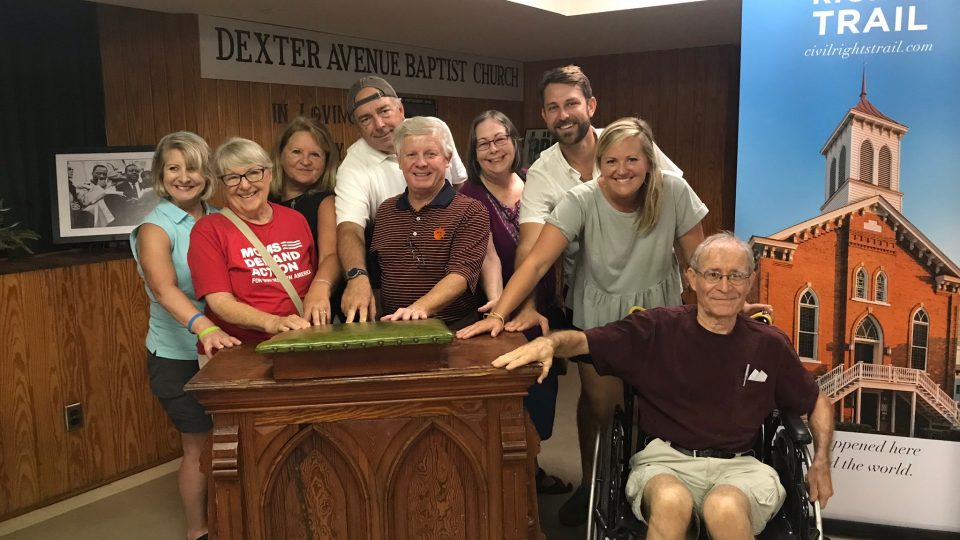 This past weekend, my wife and I, and seven JustFaith grads from Greenville, South Carolina made a journey to the heart of the Civil Rights movement. I really didn’t know what to expect. Selma doesn’t need a definition; it’s a word you have heard all your life from a distance. This weekend time and distance shortened.

I am white and grew up in the South with relatives who thought the phase, “The South shall rise again!” was a good slogan. I grew up hearing people of color referred to as “colored people” or worse, with the “N” word. There were no black people anywhere near our home or in my school, although black people would stop by and get a free mess of collards from my dad’s garden.

We took a bus to Selma and Montgomery, and I sat in the back of the bus by choice. I was quite moved by the Rosa Parks Museum where they reenacted her sitting on the bus in the middle section and refusing to move and give up her seat to a white person. That had to be incredibly brave to sit there while all these white men are hollering at you to move. I am not sure how she did it. I guess she simply had had enough, no matter what the cost.

And then the bridge in Selma, you see the historical videos of people walking across the bridge and then the terror of police and horses and billy clubs coming at them. It is hard to go back in time and think like a white person in the 1950s. Why did they hate black people so much? Why did they want to hurt them? It is the mindset of a Nazi in the days of Hitler. Superiority on steroids. They just want to vote and sit in the first available seat. Hardly, a crime.

And then the “Lynching Memorial” in Montgomery-that is the unofficial name. Officially, The National Memorial for Peace and Justice. One cannot really grasp the creativity of the designers from the pictures but as you walk and read real names and real places you have lived, one has to ask why did we do this to people? I have lived in Greenville County SC, worked in Spartanburg County SC, lived in Dade County FL, and my Father grew up Liberty County, TX – all had lynchings of real people with real names in real time. In all our hearts, man loves violence, to commit it or to watch it being committed. The Romans were at the Coliseum, the French were at the guillotines, and my ancestors were in the middle of town watching a poor black man get hung for a non-crime. It should disturb us all. It disturbed me.

And then the Legacy Museum. This was probably the most disturbing place, not because of the past history. There was plenty of past history to observe, but more for the present, what is happening now. People in jail. Thousands of people in jail. I watched one video of a prison in Alabama that guaranteed prisoners would be stabbed multiple times when you first arrived and authorities cannot stop the stabbings. If our prisons are truly like this, they should be abolished. This is a holocaust in my backyard, but I don’t smell the smoke. After an hour, I could not absorb any more injustice, sadness and pain. But, I need to know this history – past and present.  We all need to know about this history – past and present.