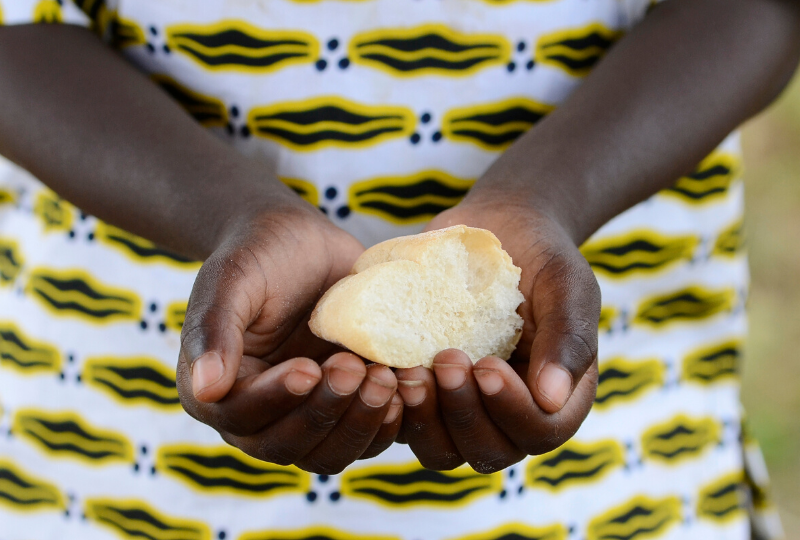 As I write this, I’m fasting today.  Every once in a while, I take a day and eat nothing all day.  I do this for several reasons, some of them physical and some of them spiritual.   So, I thought I would fast today since I’m writing about hunger and thanksgiving.

No matter how many times I do this, what always surprises me about fasting is how quickly I start to obsess about food.  I went to a meeting this morning.  It was 11:00 a.m. (I’d been fasting for just a few hours; I usually eat a big breakfast) and I couldn’t take my eyes off the apple my colleague was eating.   As I drove home from the meeting, I noticed every restaurant, every food advertisement; I thought of the leftovers in the refrigerator and considered whether or not it was really so important to fast.  “I can write the article without fasting,” my mind cajoled.

Now it’s 4:00 and the rest of my day’s work will be to distract myself unto bedtime from the hunger pangs.

Being without food is hard.  It’s hard even if it’s your choice, even when you know that there will be food tomorrow, and plenty of it.  Anybody who’s tried to diet, can tell you how hard it is just to restrict calories, much less go without altogether.  But it’s so much harder and serious when being without enough food is not your choice.

When choosing to fast, it’s a good time to consider hunger, as in the imposed hunger—chronic hunger, malnutrition and food insecurity—a big part of the world faces.  With the benefit of an empty stomach, the issue becomes real and pressing.

Around the world, 821 million people will suffer hunger today; almost all because they are poor, some because of agricultural failure, some because they are refugees, and some because they simply don’t have access to a reliable food source.  They will go to bed hungry, wake up hungry, and spend most of tomorrow hungry.  36 million died last year from not getting enough to eat.  One in four children on our planet have had their growth and development stunted by inadequate nutrition.

Here in Kentucky, the 12th hungriest state in the country according to Bread for the World, the USDA estimates that one in seven families is not able to put adequate food on the table.   To put that in perspective, I could get in my car and drive no further than four hours and see one million people with insufficient nutrition.

Hunger, it could be said, is the “biggest” problem on the planet.

But the problem of hunger is not a matter of too little food.  There is plenty of food.  The problem is distribution.  And the lack of will to make it available.

Now it becomes so obvious that the true challenge, which looks like a physical problem, is really a spiritual one.

Daniel Berrigan, the Jesuit activist well-known for his prophetic witness, once said at a conference I attended, that the “Great spiritual problem in the United States is three square meals.”  His point was not that people shouldn’t have adequate nutrition, but that constant, uninterrupted satiation and over-satiation make us numb to the world’s wounds.   Those of us who are wealthy take food for granted; we are blinded by the ease and scale of access.

Two problems arise from the reality of, well, never being really hungry.  First, we can’t relate to the reality of food deprivation and, so, the issue stays “out there.”  We get on with our lives somewhat oblivious to the profound pain and suffering that our inattention permits.

Second, and perhaps surprising, it becomes harder to give thanks.

I have never known hunger, except when I’m doing my little fasts which typically never last longer than a day or two.  But this I know: when I take my first bite after a fast, I feel a gratitude that is otherwise unknown to me.   The pleasure is profound.  Perhaps, this is why the Hebrew people were encouraged to fast: to remind them not only to care for those who were without—and to feel that care in their guts—but also to remind them how very good it is to eat when you’re really hungry.  Food, like all of life, is to be savored.   Indeed, almost every religious tradition recognizes a benefit to fasting.

During this month, we will celebrate Thanksgiving, which could be described as a food holiday.  There is no other holiday in the year that is necessarily tied to eating.   On this celebration of family and food, it may well be, ironically, that the best way to give thanks, to know thanks, to “feel” thanks, is to know deprivation, both firsthand and secondhand.   Perhaps, by doing without food for a stretch and building relationships with those for whom it is a chronic problem, we discover a spiritual portal to giving thanks.

Here’s the thing: if we can discover a profound gratitude that recognizes how dependent we are on what God has given, that gratitude almost immediately translates into generosity.   Gratitude and generosity are spiritual sisters.   What I’ve been given is to be savored and shared.  Pleasure shared is pleasure doubled.

Well, I will probably eat tomorrow morning.  My prayer until then is that I will be reminded of my countless, abundant blessings, especially the blessing of enough to eat, and will become more committed to the Gospel invitation to share them.