X
Skip to content
BlogMosaicNo Matter Where You Are From 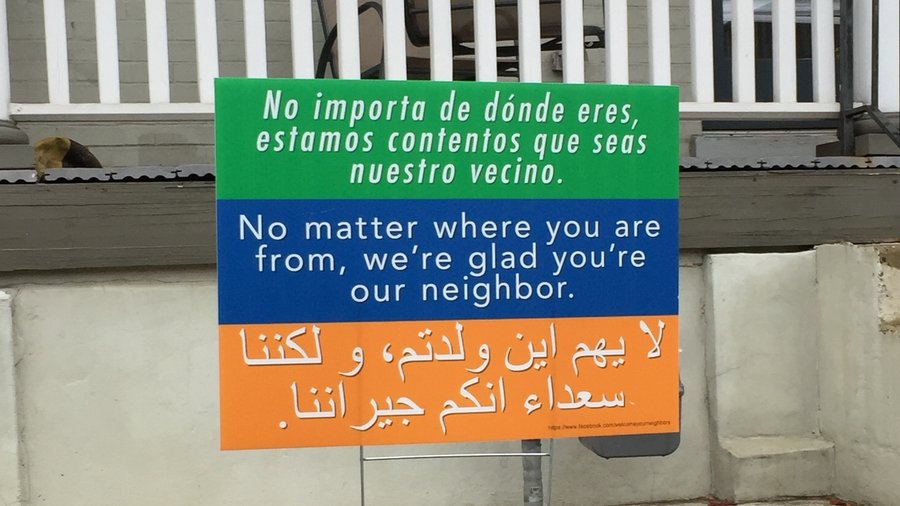 On Valentine’s Day I stood outside the local Immigration and Customs Enforcement (ICE) office for an hour holding a sign that said in English, Spanish, and Arabic, “No matter where you are from, we are glad you are our neighbor.” Several people held that same sign, no doubt taken from their yards, as mine had been. Others held signs that said things like “I Love My Immigrant Neighbor,” “Immigrant Rights Are Human Rights,” “Justice and Fairness for All.”

The Church supports the human rights of all people and offers them pastoral care, education, and social services, no matter what the circumstances of entry into this country, and it works for the respect of the human dignity of all especially those who find themselves in desperate circumstances.
– Welcoming the Stranger Among Us: Unity in Diversity, A Statement of the U.S. Catholic Bishops

As we stood, chanted, and sang, people went in and out of the building, many Hispanic/Latinos, some immigration lawyers well-known by those gathered. People passed in cars and honked their horns in support. One Latina woman stopped her car in the middle of the street, rolled down her window, and simply watched for a few seconds, tears rolling down her cheeks. Another Latina woman came out of the building, no coat, despite the chilly weather, and stopped to talk to a white U.S. citizen man in our group. I watched him take his coat off and place it gently on her shoulders. I watched him take his hat off and give it to her.

At the end of our gathering, the man announced that she was looking for a ride. Immediately a couple going in the direction she needed to go offered a ride.

“This is how it should be,” I thought. Giving a coat to a stranger without a thought. Offering a ride. Standing in solidarity, bringing attention to injustice and the people most affected by it.

Then I realized – not quite. I’d rather live in a world where we didn’t have to stand in front of the ICE office (I’d rather there were no ICE office), where our care for one another, for our immigrant brothers and sisters, were so natural that we wouldn’t need signs that said “Immigrant Rights Are Human Rights.” I’d rather live in a world where the gifts of our brothers and sisters coming from other lands were recognized and celebrated, where our differences were seen as beautiful and not threatening. That’s the world that I hope to co-create. It’s a world I catch glimpses of every so often.

The grave danger is to disown our neighbors. When we do so, we deny their humanity and our own humanity without realizing it; we deny ourselves, and we deny the most important Commandments of Jesus.
– Pope Francis

As I reflected on the way I tried to express love on Valentine’s Day, my thoughts drifted to a day about four years ago when I stood in prayer in sub-zero temperatures outside the Broadview Detention Center, run by the Chicago ICE office. Broadview holds detainees from Illinois, Wisconsin, Indiana, and Kentucky. At any given time, about 1,000 people, whom ICE processes after a raid or individual pick-up, are at the center. ICE then deports many of them. Every Friday, a group gathers for prayer in front of the facility and then prays with deportees being sent away that day.

Four years ago I was one of three people chosen to pray with the deportees. Normally, the prayers would happen on a bus, with a plexiglass/metal grate panel separating and preventing us from seeing most of the deportees. We’d have to yell through a small hole in the grate.

That day the bus was out of service, so we found ourselves praying in a much more intimate setting, at the door of five vans, which held Mexicans, Hondurans, Guatemalans, and Salvadorans. We could see and hear the men and could have even touched them, if we’d been allowed. The men’s hands and feet were shackled, so they could neither leave the van, nor make the sign of the cross when we prayed together.

Though we’d been told that deportees were sometimes angry and hostile, all we experienced was gracious gratitude. The harshest (and very appropriate) words we received were a man’s plea that we work for immigration reform. We told him we were trying to do so.

Having only words of prayer to offer felt inadequate. How could those few moments together possibly change anything?

How could standing in front of the ICE office on Valentine’s Day this year change anything? Deportations weren’t halted. Immigrants and people who “look like” immigrants still fear for their safety.

Four years ago when our group debriefed the Broadview visit, a member of our group who had spent time in jail talked about how bolstering it had been for him to see un-uniformed, unarmed people. “It makes a difference. Praying with them is not a small thing. It is a big thing.”

In Lesson 13 of “Twenty-five Lessons for Life,” Marian Wright Edelman writes, “Don’t think you have to ‘win’ immediately or even at all to make a difference…Remember that sometimes it’s important to lose for things that matter and that many fruits of your labor will not become manifest for many, many years.”

Sometimes actions like standing in front of the ICE office with a sign, praying with people being deported, calling or writing letters to legislators may seem futile. Nothing changes in the immediate moment. Things could even get worse.

Not all of us can do great things. But we can do small things with great love. –Mother Teresa

But we must keep doing them, riding on the hope that no act of love is wasted, that each one ripples out into the world creating more love, even if we don’t have the vision to see it. Let us stand with our immigrant brothers and sisters. Let us be the face of love, the arms of hope, the voice saying, “No matter where you are from, we are glad you are our neighbor.”