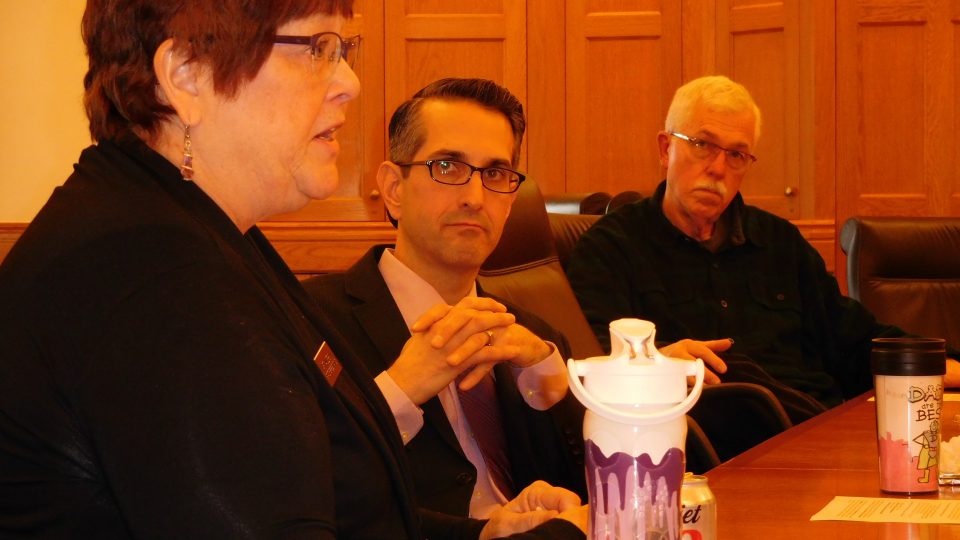 I was fortunate enough to participate in the Hunger for Change JustMatters Module in Des Moines, Iowa in early 2017. There were fourteen of us from all stripes of life: Episcopalians, Catholics, nondenominationalists, and a member of the United Church of Christ. Some were formally ordained but all of us felt called to feed the hungry.

The meetings started at 12:00 noon and were scheduled to last until 2:00 pm. Often we were so deep in our conversations it was hard to end at 2:00. From day one, I thought the time of day was a perfect setting for a discussion on hunger. Since I live over 25 miles from the meeting place, I had to leave home about 11:15—too early for lunch, so I started the meetings on an empty stomach and let me assure you by the end of the meeting I thought I had a real handle on what it feels like to be hungry. (Naive, I know, as I had no idea what it’s like to be constantly hungry.) I couldn’t get to the nearest Subway shop quick enough!

I completed the JustFaith program in May, 2016. It was a real eye-opener for this white, middle class, educated, privileged male. I learned about so many social concerns that my head was aching and my heart was bursting to do something. But what?

Then I felt God calling me to feed the hungry. As I drove to the JustFaith meetings, I went past several “abandoned” city lots and each time I felt a zing in my heart—knowing that land could be used to feed our hungry. Driven by the JustFaith experience, I got involved with our local food pantry. I received a four feet by eight feet raised bed garden plot from the County Conservation Board. Not very big, but it was a start. Thinking that many of the food pantry recipients would be Hispanic (boy was I wrong!), I decided to plant a wide variety of peppers and about 100 onions. I supplemented that with extra produce from my garden at home and from extra produce from friends’ gardens. Between my efforts and those of folks in my parish, I estimate that we donated between 800 and 1,000 pounds of fresh produce.

But the growing season was over and still God was urging me on. Then I heard about Hunger for Change knew that God was calling me.

Hunger for Change forced me to change my thinking about hunger from the local plight to a global view of the problem. We read Rich Christians in an Age of Hunger, by Ronald J. Sider. The book reading was supplemented with on-line videos and articles. The efforts of many non-governmental non-profits to bring sustainable agriculture to a hungry world were made vivid and real.

Not only is the book a fascinating read, but I guarantee it will make you fighting mad. You see, world hunger isn’t about our ability to produce food. No, it’s about greed. We have grown enough food to feed the world since 2013, but here we are in 2017 with millions of people still hungry and thousands dying daily of hunger.

For our immersion experience, we went to the State Capitol and met with two members of the House Committee on Human Resources. They treated us to an almost hour long course on “Advocacy 101,” carefully pointing out the do’s and don’ts of working with elected officials. We all came away with a much better understanding of how the legislative process works, and no longer hesitant to immerse ourselves in the system.

Joining us at the Capitol was a Congressional Aide to Rep. David Young (IA). The Congressman’s interest prompted me to send him $20, challenging him to buy as much food as he could to donate to the food pantry. In doing so, I pointed out that he would learn the difference between food quantity and food quality and get an idea of why the hungry buy what they do. Mr. Young sent back a hand written letter accepting my challenge and matching my $20. I can’t guarantee that the Congressman understood what I was hoping he would, but the food pantry got $40 worth of food.

As I learned, seeking a solution to social injustice is so much easier when you can put a face on the problem. Let me assure you, Hunger for Change does that.

A note of caution: Do not take this program unless you are willing to have your world turned upside down as you come to understand what God has in store for you.