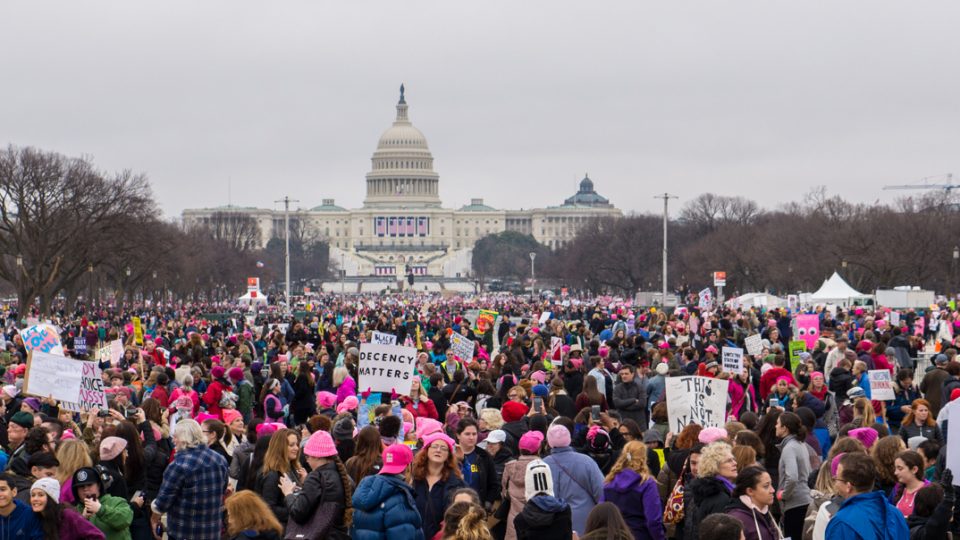 And Mary said, “My soul magnifies the Lord,
and my spirit rejoices in God my Savior,
for he has looked with favor on the lowliness of his servant.”
– Luke 1:46-48

The estimates have been between 2 and 3 million. Between two and three million people, mostly women, took to the streets on Saturday, January 21. Many for the first time. Standing with heads held high, even though structures created by men do not always affirm our worth and may even actively seek to diminish it. Even as, perhaps because, people in power may be threatening to harm the structures that do affirm and protect us, especially those on the margins. Standing in the crowd, my spirit rejoiced, my soul magnified God: I saw God, Spirit of Love, embodied in the people around me.

Though some news reports have called these gatherings anti-Trump, what I experienced in Washington, D.C. was not a condemnation, but an affirmation – of the power of women; of the need to recognize and actively affirm the dignity and rights of all people, especially women; of the responsibility of privileged people like me to speak up, to act, to affirm that “the Mighty One has done great things for me” and be a vessel to share those gifts.

The march’s vision reads: We stand together in solidarity with our partners and children for the protection of our rights, our safety, our health, and our families – recognizing that our vibrant and diverse communities are the strength of our country.

We stand together in solidarity. In the diversity of economic status, race, religion, ability, birthplace, cultural expression, and other ways that may outwardly seem to separate us from one another.

In heat, in rain, in snow, in bitter cold.

On every continent, Antarctica included.

“His mercy is for those who fear him
from generation to generation.
He has shown strength with his arm;
he has scattered the proud in the thoughts of their hearts.”
– Luke 1:50-51

Gathered together, allowing kindness and mercy to flow through us to one another, asserting power not through strength of arm, but strength of heart. When someone needed help taking a tall step up, multiple arms reached out to pull and steady. When someone needed food, it was offered. Smiles and kind words and affirmations were thrown out generously. Established relationships strengthened. New relationships formed.

The Compendium of the Catholic Church states: A just society can become a reality only when it is based on the respect of the transcendent dignity of the human person (132). Together with equality in the recognition of the dignity of each person and of every people there must also be an awareness that it will be possible to safeguard and promote human dignity only if this is done as a community, by the whole of humanity (145).

I witnessed, I participated in, the possibility of new community forming.

The group I traveled with included teenagers (the youngest being a fourteen-year-old boy), women in their seventies, and in between; white, Black, Latina, Muslim, immigrant, refugee, and a few men.

After the march, a young Black woman in our group talked about the difficulty of making the decision to come because of criticisms that the march was not intersectional enough (did not include enough voices of Black, Native, Latina, immigrant, and other marginalized groups). She said the decision to come had been the right one. She also urged us, as did speakers at the event, as do the principles of the march, to get involved, to let this act of solidarity not be a single act, but rather, for those new to the work, a beginning; for all, a harnessing of energy to be channeled to do the work put forth in the mission and vision.

“He has brought down the powerful from their thrones,
and lifted up the lowly;
he has filled the hungry with good things,
and sent the rich away empty.”
– Luke 1:52-53

“He has helped his servant Israel,
in remembrance of his mercy,
according to the promise he made to our ancestors,
to Abraham and to his descendants forever.”
– Luke 1: 54-55

Two to three million people, mostly women, took to the streets on Saturday, in an effort to remember and to practice mercy for the least among us. May that day, may that act of solidarity be more than one act, may it be one step that leads to another and another and another until we create the world we imagine.

Statement from JustFaith Ministries: JFM welcomes this powerful reflection on the largest global social justice gathering in recorded history. At the same time, we recognize that some people of faith were conflicted about some of the goals of the march organizers. We recognize the many women and men who marched because they felt compelled to speak up for immigrants, for health care for the poor, for healing for racial and ethnic divisions. We recognize those who did not march – even though they are called by faith to speak up on some of these very issues – because they believed the march conflicted with their faithful stance on the dignity of all life. Most of all, we celebrate the ways faith calls people into action for a more just and peaceful world and the compassion we show each other – even when faith calls us in different ways to do justice, love mercy, and walk humbly with [our] God”(Micah 6:8).