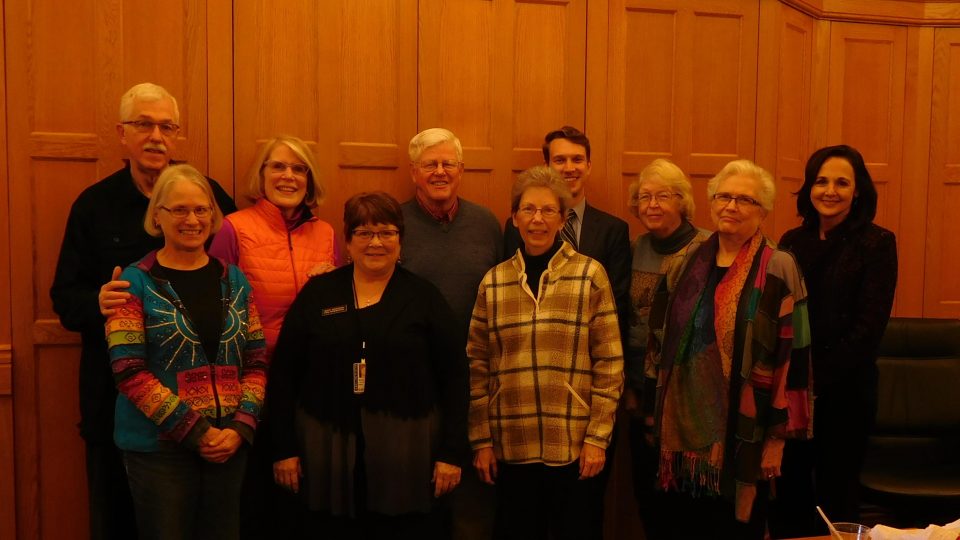 In Des Moines, Iowa, a group of 14 faithful people launched the first JFM “Hunger for Change” JustMatters module. Over eight sessions, they explored the realities of food insecurity in the world and asked each other how their faith called them to respond. They engaged in an immersion experience that brought the issues of hunger directly to the Iowa State Capitol.

In January, 2017, the group asked to meet with a couple of legislators and lobbyists to learn about issues or policies related to hunger that might be addressed during the 2017 legislative session. The group also asked to have a U.S. Congressperson (or staff member) available, as well.

On Thurs., Jan. 12, eleven members spent two hours over lunch at the Iowa State Capitol. The meeting began with the Iowa Catholic Conference Executive Director and Lobbyist, Tom Chapman, sharing information about an organization called the Iowa Hunger Coalition. The Iowa Hunger Coalition’s primary purpose will be hunger-related advocacy in Iowa and they will soon be hiring a lobbyist to help with that work.

After Mr. Chapman shared information about the Iowa Hunger Coalition, Representatives Marti Anderson (Democrat) and Joe Fry (Republican) shared their perspectives on hunger advocacy in Iowa and general tips about advocating at a state level. Both Rep. Anderson and Rep. Fry shared the need for constituents of all political parties to stay in contact with their legislators. Rep. Anderson said, “There is no partisan filter on my email inbox. Partisan politics are for the campaign season. After you are elected, you represent everyone in your district, regardless of political perspective or party.”

The immersion concluded with a few words from U.S. Representative David Young’s District Director, Eric Baker, who talked about hunger advocacy on a federal level. Mr. Baker provided a handout specific to hunger entitled, “Tips for advocating for your cause in the U.S. House of Representatives.”

Not only was the immersion insightful, but it was inspiring and re-energizing. Susie Tierney, co-facilitator of the module, said, “I was especially impressed by Rep. Anderson’s comment that eighty percent of legislation in Iowa is passed with bi-partisan support. The perception is certainly that nothing ever gets done on a bi-partisan level. She assured us that the divisiveness we hear about in the media only accounts for about twenty percent of legislation passed in Iowa. It was encouraging, to say the least!”

Group members Robin Kline and Mary Ann Koch agreed that the visit was very enlightening and encouraged JFM to keep it as part of the Hunger for Change module.

Group member and co-facilitator, Rev. Jean McCarthy, said, “My personal take-away was a real appreciation for the local impact of hunger issues, and the necessity of grassroots action in the public conversations as well as feeding the hungry. It also struck me that hunger is a very broad topic attached to so many things that legislation deals with — poverty, health care, education, etc. Visiting with the legislators helped me to see how hunger can be broken into topics and issues that can be addressed in positive ways through legislation, education and public conversations.”